There were a few questions recently raised in our online community about mixed chimerism following a Hematopoietic Stem Cell Transplant (HSCT) for X-Linked Hyper IgM Syndrome (XHIGM) and what that means for a long-term cure. I thought it would be good to write a post about this that can be used to inform parents and families going through stem cell transplant.

First, some background about XHIGM that is important to know. We have already written in detail about Hyper IgM Syndrome on our site, but this is a good place to have a refresher. As part of our adaptive immune system, our bone marrow produces T cells and B cells to fight germs (viruses, bacteria, and fungi) that may enter our bodies. One specialized method of fighting these germs is by creating immunoglobulins (Ig’s or antibodies).

In our blood, the B cells have the ability to differentiate and create IgM antibodies that can recognize and fight germs. However, the IgM is not specialized in or very good at getting rid of the antigens it comes across. The more specialized Igs are, the more IgG and IgA that the IgM turns into when it recognizes a specific kind of germ. This is called class-switching, since the IgM antibody switches its class to IgG or IgA. When a person gets a vaccine, it is one way to train the body to create the specialized IgG for that virus or bacteria so that, when your body is exposed to the same virus or bacteria in the future, it already has the IgG’s to fight it. 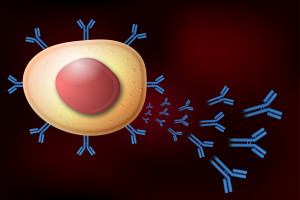 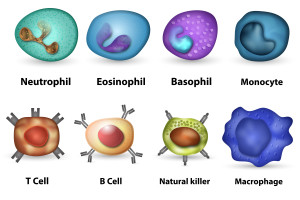 With  XHIGM, the defect/mutation is in the CD40L protein expression on the Helper T Cells. For a healthy and functioning immune system, we all need T helper cells (Th) to express CD40 Ligand (CD40L) in order to signal to the CD40 protein on the B cells, which allows us to class switch from IgM to IgG. Imagine that in order to create antibodies, the Th cells need to use their cell phones to call the cell phones of the B cells to tell them how to make IgG and what kind of IgG to create based on the germ it has spotted. Without CD40L expression, the Th cells essentially do not have their cell phones on and cannot communicate with the B cells. The result for XHIM is little to no antibodies, which leads to a lifelong need for antibody replacement therapy (IVIG or SCIG). We also need the Th cells to use CD40L expression to communicate with other immune cells like phagocytes (macrophages and neutrophils, and dendritic cells). For XHIGM patients, if the Th cells don’t have their cell phones on, they cannot talk to the phagocyte cells, and this means the phagocytes cannot do as good as a job as they should in clearing all germs. This is one reason XHIGM patients are susceptible to opportunistic infections like pneumocystis jiroveci pneumonia (also known as “PCP” and “PJP”), a life-threatening pneumonia, and need to take prophylaxis antibiotics.

When a XHIGM patient has a bone marrow transplant or HSCT, the purpose is to replace the Th cells that do not express CD40L with donor cells that do express this protein. However, the only way to do this is to replace the whole factory that creates all blood and immune system cells. This factory is called the bone marrow, and it lives inside every bone in the human body. By clearing room in the bone marrow, and sending in stem cells from a healthy donor, the goal is to replace all the factory parts with machinery that can create working T cells.

With most transplants, the goal is to entirely replace the host bone marrow with the donor stem cells with the goal of having 100% donor cells in the bone marrow. However, many XHIGM patients end up with less than 100% donor cells. We call this “mixed chimerism” because the composition of the bone marrow is made up of a “mix” of donor and host cells. There are several theories why this may be the case, including relating to the type of conditioning received before transplant, but it’s all speculative until more research is done to understand this mixed chimerism phenomenon.

Regardless, while mixed chimerism is not ideal, it seems to be more frequent with XHIGM transplant, and the reason for this is still unknown. The good news is that for a working immune system, one does not need 100% of their Th cells to express CD40L, so a situation of a mixed chimerism of donor and host cells can still be a cure. The word chimerism comes from the Greek word Chimera, a mythological, fire-breathing monster, commonly represented with a lion’s head, a goat’s body, and a serpent’s tail. The idea is that you have a mix of donor and host cells living together in the bone marrow and traveling throughout the blood and body.

A stable mixed chimerism can stay like this forever, and both donor and host cells work together. For XHIGM, the theory is that they only need around 20% of the T cells to express CD40L to create a sufficient number of antibodies and communicate with the phagocytes. This theory is based on carriers of XHIGM that have different levels of CD40L expression (most around 50%), are relatively healthy and have IgGs at normal levels. So if only a percentage of the Th cells have their cell phones on, it is still enough to communicate with the B cells for class switching and antibody production and for good communications with the phagocytes. 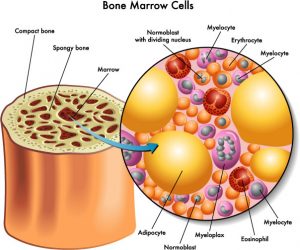 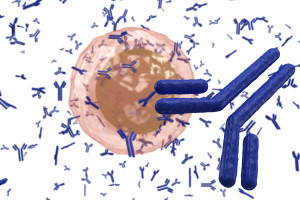 The more concerning issue that can arise is if the donor and host cells are not playing nice with each other post-transplant. This sometimes has to do with whether the donor and host are good matches. However, even with a 10/10 match, you can see the T cells of the host attack the donor cells, or vise-versa. This is the same reason one can have graft vs host disease (GVHD) even with a perfect match.

For some transplants that never really engraft on the T cell line, the host T cells can slowly attack and erode the other donor lines leading to a graft rejection.  Still, many in the XHIGM community have long-term mixed chimerism, which means that their cells play nice with each other and all live in a happy home in the bone marrow.

This results in the Th cells that have working cell phones being able to make enough calls to the B cells to create good enough level of antibodies in the blood and a good response to vaccines.

Many transplant centers around the world do not have the ability or the funds to test the level of chimerism or differentiate the donor chimerism by the 4 bloodlines (T Cells, B cells, NK cells and Myeloid cells). Even in the USA, most centers do not run more than one or two chimerism tests during the first year of transplant.

For many patients with 100% donor engraftment this is sufficient, but with any doubt regarding the percentage of donor cells, more chimerism tests and information can be helpful in deciding on possible intervention to increase the amount of donor cells in the marrow and to predict the long-term outlook of the donor graft.

If you have any questions of comments please use the comment section below and we will answer them. If you liked what you read, please share with a friend. 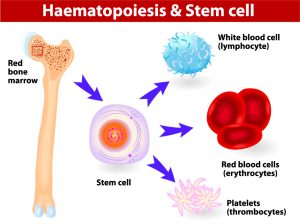 Warning: Use of undefined constant GLOB_BRACE - assumed 'GLOB_BRACE' (this will throw an Error in a future version of PHP) in /var/www/wp-content/plugins/divi-bars/includes/class.divi-bars.controller.php on line 67

Warning: glob() expects parameter 2 to be int, string given in /var/www/wp-content/plugins/divi-bars/includes/class.divi-bars.controller.php on line 67