What is X-Linked Hyper IGM?

X-Linked Hyper IGM is a genetic mutation passed along on the X Chromosome. The syndrome itself almost always only affects boys as girls have two X’s and are mostly just carriers. Hyper IGM is so rare (1 in 1,000,000) that it is never something that is tested for (and most doctors have probably never even heard of it).

How does X-Linked Hyper IGM affect my child?

Basically the gene mutation means that the child is missing a protein that his T-Cells needs to produce (called CD40 Ligand) that is necessary to in the process of producing antibodies, or immunoglobulins. This protein is used by the T-Cells to communicate (AKA tango with) with the B-Cells and allows them to do their job as needed. This leaves a huge hole in one’s immune system.

Can you explain this whole immunoglobulins thing?

Imagine an army with lots of foot soldiers (T-cells) and Special Forces (Immunoglobulins) constantly at battle with the world around us. This army keeps us all safe on a daily basis, and when we encounter viruses or bacteria that the foot soldiers cannot not fight off, the special forces take over.

A child with Hyper IGM has no  ability to create special forces, so he cannot recognize or destroy viruses (think flu, cold, mono, herpes, etc.) and this leaves him very vulnerable. With Hyper IGM, one’s  T-Cells are also missing some of  basics of fighting skills because without the missing protein some communication with other parts of the immune system fail as well.  Therefore, they are susceptible to many opportunistic infections (like PCP/PJP and cryptosporidium) that the rest of us just fight off without even getting very sick.

What are the dangers of Hyper IGM?

First, recurrent infections are a  major cause of lasting organ damage. As time goes by many Hyper IGM kids have orgran damage to the lungs and liver from these infections. Second, opportunistic infections such as cryptosporidium, a parasite found in water, can kill Hyper IGM patients as there is no cure for cryptosporidium without a functioning immune system.

PCP (PJP) phenomena is another common opportunistic infection affecting many Hyper IGM at a young age. Lastly, cancer, malignancies and liver and central nervous system diseases. As time goes by there are higher risks of all these, leading to a median age of 24 for Hyper IGM patients. Our immune system is constantly fighting off cancers before they even become an issue and the child’s immune system cannot do that.

So what can be done?

In the short term, treatments with immunoglobulin replacement therapy (IVIG or SubQ IG) and weekly antibiotic prophylaxis (Bactrim) are the common method of keeping Hyper IGM children healthy.  These monthly or weekly infusions of IGG’s replace just one of the types of antibodies they are missing (currently there is no method of replaces IGA or IGE).  This, coupled with major lifestyle changes (like isolation from sick people, bottled water, etc.). Some Hyper IGM patents can live for many years this way, but sadly it is not enough in most cases. The only known possible cure is a Bone Marrow Transplant which essentially would replace their entire immune system with a donor’s immune system that works properly.  Of course, this is a complicated and risky process with high risks and no guarantees and cannot be taken lightly.

What Is a Bone Marrow Transplant (BMT)?

Currently, there is no way to fix the gene mutation that causes Hyper IGM, but there is a way of replacing the bone marrow and giving the child a new immune system. Let’s re-examine the army analogy: One can look at the bone marrow as the army base that the immune system (as well as the blood) is created and trained in. The idea is, if the child’s T-cells cannot produce the protein he needs, let’s give them a new army base, with soldiers that know what they are doing. 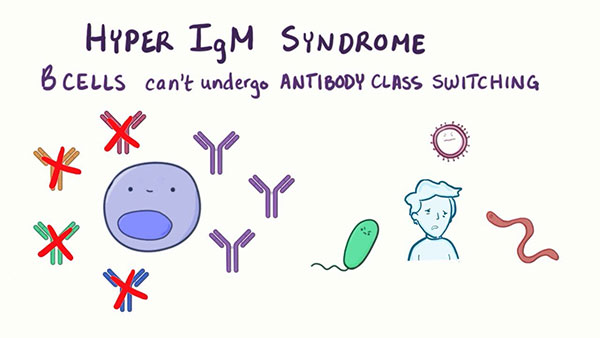 X-Linked Hyper IGM is a genetic mutation passed along on the X Chromosome. The syndrome itself almost always only affects boys as girls have two X’s and are mostly just carriers. Hyper IGM is so rare (1 in 1,000,000) that it is never something that is tested for (and most doctors have probably never even heard of it).

Warning: Use of undefined constant GLOB_BRACE - assumed 'GLOB_BRACE' (this will throw an Error in a future version of PHP) in /var/www/wp-content/plugins/divi-bars/includes/class.divi-bars.controller.php on line 67

Warning: glob() expects parameter 2 to be int, string given in /var/www/wp-content/plugins/divi-bars/includes/class.divi-bars.controller.php on line 67