THE CONFERENCE THAT CHANGED ONE HYPER IGM FAMILY’S TREATMENT COURSE 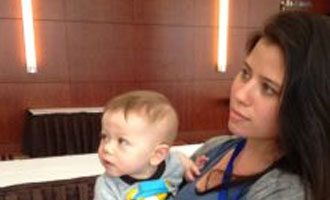 I wanted to share a short tidbit about our first experience of going to an Immune Deficiency Foundation (IDF) National Conference shortly after our son Idan was diagnosed.

Idan was discharged from the pediatric ICU on May 1, 2013, and was officially diagnosed with XHIGM on May 16th when his test results came back from Seattle. A few days later, we were in the outpatient clinic in NYC visiting Idan’s immunologist. She handed us a flyer about the IDF conference that June in Baltimore, and highly recommended we attend to learn more about Hyper IgM and meet some doctors.

We had already planned to meet doctors from transplant centers at Duke, Boston, New York, and Cincinnati in the following few weeks, and were not so sure we could pull off another trip to Baltimore, especially with an 11-month-old Idan, who at that point we treated like a bubble boy as we knew we were heading to BMT soon. Still, our doctor said she really wanted us to meet and talk to Dr. Troy Torgerson from Seattle and said it was worth going. So after visiting all those other transplant centers in the same month, we decided to head down to Baltimore to attend the IDF conference.

We enlisted Amanda’s parents to drive us the 6 hours to Baltimore and stay with us at the hotel so they could take care of Idan. We met Dr. Fuleihan from Chicago at the HIGM session. He gave the most coherent and comprehensive explanation of HIGM of all the explanations we had heard thus far from any of the dozen doctors we had consulted. We met another mother and learned about her son’s story. We also met two older pateitns and learned that some HIGM patients can live and thrive despite the HIGM diagnosis. And, most importantly, we met Dr. Torgerson. His lab was the one that ran the diagnostic test to confirm Idan had XHIGM.

Dr. Torgerson sat with us for over 90 minutes (even though he had just arrived from the airport and had not even checked into the hotel yet). He answered all our questions (and we had many). Then, he told us about the clinical trial Seattle was doing with Treosulfan, the only center in the US using that type of chemo. It was that conversation at the IDF Conference that changed the course of our whole life, and Idan’s life as well. We had visited the top BMT centers on the east coast but that conversation with Dr. Torgerson convinced us that we also needed to fly to Seattle as well.

We would eventually choose Seattle for Idan’s transplant a few months later. We learned so much about HIGM from our conversations with Dr. Torgerson and Dr. Hans Ochs during our time in Seattle. It was Dr. Ochs that suggested to Amanda that we start the Hyper IgM Foundation and bring our community together with a mission to create a brighter future for all patients with Hyper IgM Syndrome. A few years later, we have connected hundred of HIGM families to each other, and just announced our 3rd year of research grants with $25,000 in research funding.

All this was possible because Amanda and I decided to attend the 2013 IDF National Conference. This year, for the first time, we have a dedicated Hyper IgM track at the conference and are bringing in many of the biggest experts on HIGM to talk.

The Hyper IgM Foundation has funding available to help support the families attending the conference with travel and hotel costs, which hopefully will draw a larger group of Hyper IgM families to the conference. We are looking forward to an excellent and informative day with the leading experts in Hyper IgM, and we hope you all will join us there!