A MITZVAH – RAISING AWARENESS AND FUNDS FOR THE HYPER IGM FOUNDATION 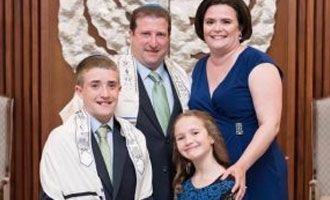 A good deed. A kindness. Or in Hebrew, a Mitzvah. These are all words that mean the same thing — to do a benevolent, charitable act sometimes from the goodness of your heart… and many times if you’re a 13-year-old boy, for your mitzvah project. 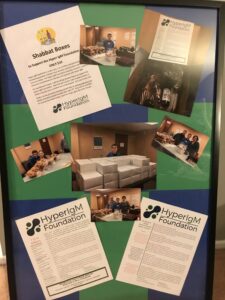 Let me start by saying thank you to Jarred Saltz for his dedication, hard work and the considerable impact that he made on Idan Zablocki, the Hyper IgM Foundation and the entire Hyper IgM community. Taking time out one’s day filled filled with friends, family, and studying is not always easy, but Jarred went above and beyond. With a goal of $250, Jarred went up on the stage of his temple on May 27th with the success in raising almost $500, collecting toys and books for Hyper IgM patients and raising awareness through campaigning.

Jarred used a Shabbat Box, a box filled with traditional items to help patients observe the holy day of Shabbat, a weekly day of rest in the Jewish religion, to fundraise and raise awareness about Hyper IgM Syndrome. He truly made the project his own and dedicated the months leading up to his bar mitzvah flyering on social media, with the help of friends and family, to bring the Shabbat Box campaign to the eyes of people all over the world.

Jarred’s bar mitzvah was tied to the concept covered in his Torah portion of B’midbar perfectly, being that it means to help your community while bringing the community together. 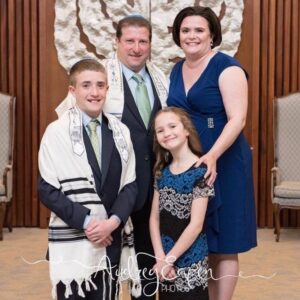 He pinpointed the importance of paying it forward to someone who may need support more than anything. Jarred brought his community together to raise money and perception about a rare immune deficiency disorder that was affecting a close family friend of his, Idan. On Jarred Saltz’s bar mitzvah day not only did become a man in the Jewish religion, but he became a kind, generous, altruistic man. We are so proud to call Jarred an honorary member of the Hyper IgM Foundation, and we encourage many other young people to take on projects like his.