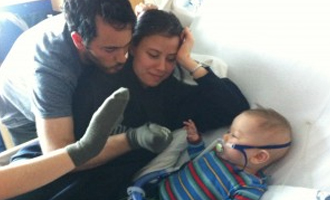 This is a repost from Akiva and Amanda Zablocki’s blog that follows their son’s journey with Hyper IgM. See more at www.idanmyhero.com 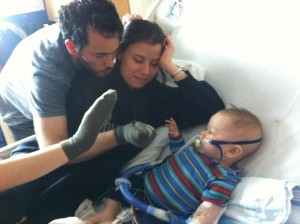 Today marks the third anniversary since that fateful trip to the ER.  The very first sign we had that our world would come crashing down.  I remember our silent speedy march to the pediatrician’s office that morning.  The devastating news that Idan would need to be transported to the ER, immediately, because he wasn’t getting enough oxygen.  The fights with the doctors to allow us to feed him, with a burning feeling in the pits of both Akiva’s and my stomachs, knowing that his condition was deteriorating right before our eyes.  It’s an indescribable feeling to watch your baby be poked, prodded, and struggling to breathe. To know that the next breath could be his last. 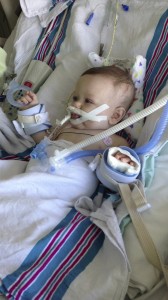 When we walked into the hospital that day, we stepped into a vortex.  An unfamiliar and unfriendly world.  We were terrified beyond belief, and drew strength and courage from the one person who seemed to have more than any of us put together – Idan.  It astounds us to this day that, despite tubes down his throat, in his nose, IVs in both arms and legs, restraints on his wrists tethering him to a grown-up size bed, surrounded by strangers and loved ones wearing masks and yellow gowns, despite all that, his little fingers curled around the little caterpillar his grandparents gave him, and his eyes shone bright, and he smiled and giggled.  We turned on the music and danced in his room.  We did puppet shows and read books, we even introduced him to Sesame Street (all the rules about screen time seemed to fly out the window).  Three weeks spent in the pediatric ICU, and Idan fought off PCP – a pneumonia that threatened to take his very life.

You all know how the story goes by now… We emerged from the hospital to discover that his pneumonia was simply the introduction to an even scarier world: the world of Hyper IgM.

When we started this journey, we felt so alone.  The disease was so rare, and there was no simple way to reach others who had it.  That all has changed.

After three years, we have built an army of other parents, patients, and physicians who know all about Hyper IgM.  We receive messages and emails on a weekly basis, introducing us to a newly diagnosed family, or patients who have lived with the disease for decades.

Earlier this week, we spoke to a mom of nine children who shared her story with us.  Five boys born with Hyper IgM.  Three of them passed away much too soon.  Two days later, we were contacted by a family who, like us, rushed their son to the ER because of PCP.  And that same week, a family from South Korea, who found the Hyper IgM Foundation’s website and expressed such gratitude that, after so long of fighting this disease on their own, finally they were connected to a community of others facing the same challenges they do on a daily basis.  When these families were introduced to the Hyper IgM community we founded a couple years ago with the few other families we had been fortunate enough to meet, the response was overwhelming – as it always is.  Dozens of comments of welcome, advice, and support.  I read the comments on my way home from work, and burst into tears.

Yes, we were so alone once.  As were all of these families living in different corners of the world.  New York, Louisiana, Ohio, Florida, Texas, Illinois, Canada, Australia, New Zealand, England, the UK, Romania, South Korea – just to name a few.  We have all joined hands, and all of a sudden, one voice was replaced by one hundred voices.  We have supported each other through bone marrow transplants, infections, even cancer and death.  We are not alone anymore. 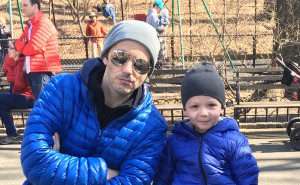 For the past three years, we have spent every free moment becoming experts on Hyper IgM, consulting with the world’s foremost immunologists and transplant teams, attending conferences and meeting families living with the disease.  Last year, we formed the Hyper IgM Foundation to improve the quality of life and longterm outlook of patients with Hyper IgM, and we have been so grateful for the outpouring of support we have received.  We are already accomplishing our mission, which is in large part due to the tireless efforts of Akiva, who has spent every waking minute working closely with families, physicians, and other immune deficiency networks and foundations.  We have found friends and allies in physicians around the world who volunteer their time to consult with parents about treatment options and frequently lend their wisdom to answer questions raised by members of our community.  Because of the work of the Foundation, there is now heightened attention on critical research that needs to be done to understand more about this rare and tricky disease.  So not only are Akiva, Idan and I not alone anymore, no one with Hyper IgM has to feel alone – ever again.