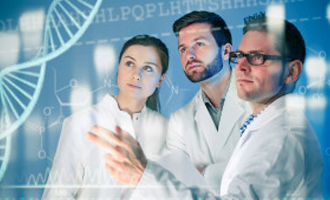 Some exciting research news coming out of Seattle this week with the publishing of a paper in Blood Journal  by the Center for Immunity and Immunotherapies, Seattle Children’s Research Institute called ​Targeted gene editing restores regulated CD40L expression and function in X-HIGM T cells. This is a very early stage gene editing technique that has shown promise for a potential therapeutic benefit for X-Linked Hyper IgM Syndrome (known as CD40L Deficiency). Key take away according to the paper is “The use of this method to edit X-HIGM patient T cells restored normal expression of CD40L and CD40-muIg binding, and rescued IgG class switching of naïve B-cells in vitro. These results demonstrate the feasibility of engineered nuclease-directed gene repair to restore endogenously regulated CD40L, and the potential for its use in T cell therapy for X-HIGM syndrome.”

Key points in the paper: Gene editing restores regulated CD40L expression in X-HIGM T Cells, reconstituting their ability to initiate B cell Ig class-switching – Why is this important? Antibodies are produced by B cells, but this process is tightly regulated to prevent unnecessary antibody production. In order to get activated and produce antibodies, B cells first need to meet their target (also called antigen). In addition, B cell can change the type of antibody they produce into a more potent type in a process called “Class-Switching”.  However, for that to happen, another activating signal is required. This signal is provided by T cells and sometimes described as “T cell help”. The protein responsible for providing this important signal is called CD40 Ligand (CD40L) and is expressed mostly on T cells.  X-Linked Hyper IgM Syndrome (X-HIGM) patients have mutations that results in either zero expression of the CD40L protein on the surface of T cells or no binding between that protein to the CD40 protein on B cells. This results in lack of class-switching of the antibodies from IgM to IgG, IgA or IgE. Essentially, X-HIGM patients cannot produce antibodies as a result of not expressing the CD40L protein. So a mutation that mostly affects T cells, prevents these T cells from “helping” B cells and therefore looks like B cell problem. In this article, the Seattle team demonstrated that they can effectively edit the T cell genes to correct the issue and lead to normal expression of the CD40L protein.

What’s new? Previous attempts to edit the CD40L gene in mice successfully restored CD40L expression, but resulted in the mice developing lymphoproliferative disease (referring to a condition in which lymphocytes are produced in excessive quantities). Why does that happen? Many genes in the immune system are tightly regulated. This means that they are not always expressed, and get activated only when needed (for example, when the body is fighting an infection). Regulated expression is needed in order to prevent constant activation that would result in ongoing inflammation and either tissue damage or autoimmunity (immune system attacking the body). CD40L is one of these regulated genes. CD40L does not express on resting T cells, but are rapidly expressed when they are activated. When an infection is cleared and the danger goes away, T cell do not express CD40L anymore (they downregulate it), as there is no need to tell B cells to produce more antibodies. So although previous attempts successfully restored CD40L expression, they probably resulted in constant expression of CD40L (unregulated expression) and lead to lymphoproliferation . For this reason the team aimed in this study to preserve the gene regulation, so it will only be active when needed, and allow safe correction of the disorder. The team reports that they successfully edited the gene without an issue with regulation. Their method restored normal expression and normal function of CD40L in X-HIGM patients cells in the lab. These results demonstrate the feasibility of gene repair to restore regulated CD40L, and the potential for its use in T-cell therapy for X-HIGM syndrome

Other points in the study: The CD40LG locus can be specifically targeted and repaired in primary human T cells by insertion of a spliced CD40LG cDNA – What does this mean? Genes have complicated structure and contain different elements and different regions. they are composed of exons, introns and many regulatory regions. Exons are part of the gene that carry the code for making a protein – a protein will be made (translated) based on the DNA sequence of the exons. Introns are sequences between exons that are part of the gene but later will be cut out and will not be translated into protein. Regulatory regions can be inside the gene, before the gene or after the gene, and are responsible for deciding when the gene will be expressed (regulation). With recent advances, scientist are able to design enzyme and direct them to cut the DNA in specific sites. Some people describe it as DNA surgery. Once the DNA is cut, there is an opportunity to insert another piece of DNA to the cut site, and that piece will now become part of the DNA. The team of immunologists were able to use this method to edit the CD40L gene in the specific location that they aimed. By cutting the DNA in the specific site and inserting a new DNA sequence that codes for normal CD40L they “fixed” the gene in the area that would not affect the regulation of the expression. This was a key objective that they obtained.

The paper also give us a hint of what the team will be working on going forward: “By correction of the primary defect associated with disease (absent T-cell help), an adoptive T-cell therapy using edited autologous T cells may provide a therapeutic benefit to recipient X-HIGM subjects.” In the near future this approach may be used to take out T cells from patient, correct the gene, and then infuse back to the patients their own corrected cells, providing a therapeutic benefit to the patient. The team showed that the edited T cells had the same broad repertoire as normal T cells, meaning that these cells should provide protection against a broad spectrum of antigens (and therefore pathogens), and therefore probably provide help to a wide repertoire of B cells. The paper hypothesizes about future methods to use the edited T cells as therapy, including  “hyper-vaccination in the period immediately following delivery of CD40LG  gene-edited T cells in order to generate a repertoire of switched memory B cells.”

One of the questions remained to be answered is how long these edited T cells would survive in the body once they are infused back to the patients. In addition, although CD40L is expressed mostly on T cells, it is also expressed on variety of other cells that might be responsible for clinical symptoms of Hyper-IgM syndrome, other than antibody deficiency. Therefore, in the future, the hope is to use a similar approach to edit bone marrow stem cells (very early developed bone marrow cells that give rise to all different types of blood cells) and that would result in “sustained engraftment”, permanent cure without full bone marrow transplant, and ongoing spontaneous production of variety of repaired cells.

They end with saying that this approach supports “the potential of this methodology for treatment of X-HIGM syndrome and, likely, other primary immunodeficiency diseases including those where regulated expression of a transgene is required or highly advantageous.”

The Hyper IgM foundation is excited to see where this research will lead and we aim to raise funds so that we may help accelerate these type of work and support Immunology teams looking for cures for Hyper IgM Syndrome.

Here is the complete abstract of the paper and a link to the paper on the Blood Journal:

Loss of CD40L expression or function results in X-Linked Hyper-IgM Syndrome (X-HIGM), characterized by recurrent infections due to impaired immunoglobulin class-switching and somatic hypermutation. Previous attempts using retroviral gene transfer to correct murine CD40L expression restored immune function; however, treated mice developed lymphoproliferative disease, likely due to viral-promoter dependent constitutive CD40L expression. These observations highlight the importance of preserving endogenous gene regulation in order to safely correct this disorder. Here we report efficient, on-target, homology directed repair (HDR) editing of the CD40LG locus in primary human T cells using a combination of a TALEN-induced double-strand break and a donor template delivered by recombinant Adeno-Associated Virus (rAAV). HDR mediated insertion of a coding sequence (GFP or CD40L) upstream of the translation start site within Exon 1 allowed transgene expression to be regulated by endogenous CD40LG promoter/enhancer elements. Additionally, inclusion of the CD40LG 3′-untranslated region (3′-UTR) in the transgene preserved post-transcriptional regulation. Expression kinetics of the transgene paralleled that of endogenous CD40L in unedited T cells, both at rest and in response to T cell stimulation. The use of this method to edit X-HIGM patient T cells restored normal expression of CD40L and CD40-muIg binding, and rescued IgG class switching of naïve B-cells in vitro. These results demonstrate the feasibility of engineered nuclease-directed gene repair to restore endogenously regulated CD40L, and the potential for its use in T cell therapy for X-HIGM syndrome. Submitted November 23, 2015.