February 17th, 2016 – The Middletown Press covered Nar’s journey with Hyper IgM Syndrome back in June of 2015. In this update article, the Press reports on Nar’s upcoming transplant at Sloane-Kettering Memorial Hospital in New York this coming Spring. Nar is indeed one of the ‘luck ones’ with “several bone marrow donors on the national registry.” 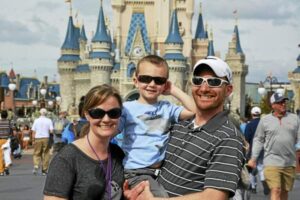 It has been a busy few months for Nar and his family as the Press reports:

“The family has been overwhelmed by community support. “It’s been an incredible outpouring,” said Meaghan Scaia, of a gofundme campaign that has so far raised nearly $20,000 in seven months. Several pasta dinners were organized by volunteers at the St. Francis Parish Hall, St. John Paul II School and St. Mary of Czestochowa Catholic Church with help from the Knights of Columbus and others. “Work, family and friends have helped us feel faith that he’ll get through this … the help is not just financial,” mom explained.

With mounting medical expenses and more anticipated during Nar’s hospitalization, financial assistance goes a long way to reduce stress on the family. Meaghan Scaia anticipates spending up to three months at a Ronald McDonald House in New York as her son recuperates. During the first six weeks, Nar will be with one or both parents, who were able to take some time off from their jobs at Middlesex Hospital and the UConn Health center.

“Over past few months, so much has happened,” said Meaghan Scaia, referring to Nur’s winning nomination for Make a Wish Connecticut and the family vacation that followed at Give Kids The World Village. The village, a 79-acre, nonprofit “storybook” resort in Central Florida is where children with life-threatening illnesses and their families are treated to week-long, cost-free vacations.”

Read more about Nar in the Middletown Press. For updates on Nar Scaia III, visit Nar’s Army on Facebook. To donate, visit gofundme.com/NarsArmy.